Tonight I was working on a Japanese paper thats due in the morning.. I felt like I needed a break and decided to take a drive down to my dumps to see what I could find. When I got to the first place I was excited because the gate was still open and I took this to mean that some good stuff had recently been thrown out; however, when I made my way over to it, I discovered nothing of value.. disappointment... So next, I went to the grocery next door, hoping for some fresh food. But again, I was disappointed to find absolutely nothing! This is unusual for me and I was not in the mood to go home empty handed after all my studying and hard work! I decided to take a detour home and check one more place on the way home.. and its where I found my loot. Not a great bunch of stuff, bu there were 3 cases of potato chips, totaling 35 unopened bags of assorted flavors!!! It goes to show that even if you are not finding anything, there is a treasure trove in another dumpster somewhere... You just have to LOOK FOR IT!!! Ill keep several bags in my car to give out in care packages to the homeless. Speaking of which, I never posted the other day about the two packages I gave away. There were two individuals that got my packages last week; lots of pastries, raisins, cookies and such... the feeling I got from these simple deeds is paralleled only by the one I had when I broke down thinking about refugees accompanying me on dives; a mix of extreme grief and elation.. Its like a drug now, something that I feel almost guilty and a little selfish for feeling to such an extreme extent, almost like an orgasm. Is it right to take so much pleasure in the feelings I get from giving these things away..? Somehow, it feeling so good feels wrong........
As told by Michael at 5:48 PM 1 comment:

I stopped at one grocery on my way home tonight and found a bunch of meat and potatoes.. Ill give the meat to my brother.. I also went to the pharmacy the other day on my way home and found some stuff; ill throw it all in to one list:

Not really what I was looking for, but someone can appreciate it.. I always seem to forget about posting recipes so I feel like I should include one in here:

Preheat oven to 350. Heat oil in a wok and add cashews when hot, sauteeing for about thirty seconds. Add spices and continue, but be careful not to burn. spread nuts on baking sheet and roast for about 5 minutes, taking care not to over cook.

Remember all those cashews I found the other week? This is a tasty snack for any occasion. I burned them every time, but they were still good... haha
As told by Michael at 5:55 PM No comments:

Email ThisBlogThis!Share to TwitterShare to FacebookShare to Pinterest
Labels: Recipes

Last night the weather was perfect for the first match of the kickball league that my friends job is in. They lost, but it was fun none the less. On the way home I decided to stop by a couple places near by and was quite pleased with the results: 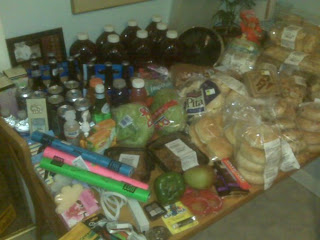 In other news, I have started a new group on Meetup.com called Triad Freegans. I just started it about a week ago and have five members now. Our first meet up is tomorrow night, 8pm at New York Pizza on Tate Street. I figure it will be a good opportunity to meet each other and exchange some stories and get to know each other a little bit before we go out on our first dive together. If you want to find out more about our group, you can go to meetup.com/triadfreegans. Once we get the group established and have regular activities scheduled, I want to get back to weekly feasting! For those who have had the pleasure of attending, you know how much I love them! Im still looking for a good venue for us to meet at but am having a hard time thinking of good places.. I love you all, but I don't want to have tons of people over all the time.. any ideas on where to find info about community facilities or something like that where we could meet?
As told by Michael at 11:12 AM 2 comments:

On a whim, I decided to stop at one of my pharmacies on the way home and was delighted with the results. I dont often go in the middle of the day, but this particular dump set back on the side of the building and not in plain view, and on a Sunday afternoon I felt safe enough to take a peek. In it was:

Now I can eat some of the cereal iv'e been holding on to.. Fortunately, it was a mild day and it seemed to have just been tossed since everything was still cold. Since I dont really drink milk I need to find friends and neighbors that would like some! The juice is perfect for all of my friends who seem to be getting sick this week.. hopefully I will avoid any illness!
As told by Michael at 5:21 AM No comments:

I was on the way home after a few drinks at the bar with a friend when I found myself crouched over a pile of fruit inside one of my dumpsters, laughing to myself at the great pleasure I was taking in the whole experience. I love diving. It has become much more that something I do when Im hungry; its become a hobby, much like my playing the cello. I do it when I need a morale boost or when Im bored or angry.. Being a solitary experience, it helps me to step back from my self and regroup my thoughts. The whole process has become routine and the bins all start smelling the same, unless there's something really gross in there. Most often the smell is not a big issue and it has even gotten to the point where it is somewhat comforting; an indicator of the treasures Ill soon be finding..
I recently found out about Meetup.com, a venue for people with like interests to communicate and get together to share their interests with. This seemed like a great way to get a group together for Triad freegans and I began creating a page, but soon realized that you must pay for the services.. So maybe not. Im trying to find a similar place that is free.. anyone know where I could look?
Anyway, here is the list form the other night's dive:

I love my pharmacy. When they stock new inventory, they take out the old stuff, put it in a box all together and toss it in the dump. All I have to do is stop by to pick up my "care packages" as I have come to call them. They almost always have food in them and more often than not contain medicine, books, electronics and all kinds of other great stuff! The latest care packages that I picked up had:

I don't have a use for lots of the thing that I bring home from the pharmacy, so Ive been working on a plan to put together care packages for people in the community who need it. So far craigslist has been a good venue to make my packages available, but whoever is coming obviously has access to a computer and I want it to go to people who don't have anything. I have also begun keeping extra food stuffs in the car to give to the many homeless people who often stand at what seems like every intersection. If anyone else has experience with anything like this, Id like to hear your ideas on how to get things to those who need it and other related topics.
As told by Michael at 1:16 PM 3 comments:

The last few days have been rainy and cool, so I decided last night was a good night to check out the usual spots. I stopped at each of the three grocery stores that I frequent and one of the pharmacies. I immediately spotted loads of stuff and was thrilled to find that everything was still cold to the touch! I'm glad I went because each spot had either something on my wish list or a random gem. Here's the list:

Most of the stuff was especially dirty with lots of other food residue on it; garbage trucks had been the day before and the bins were empty when they took out trash that day, so everything was just getting thrown in together and lots of their containers broke. One bin had tons of yogurt, juice, milk, soymilk and such, but the individual yogurt cups had broken all over everything. Fortunately, the large packs were in tact, kept cold and protected from the yucky by the cartons they were in. The salsa and cherries were part of cases that had been dropped and the other jars were smashed and all over everything. I would have gotten a few more jars, but one poke through my gloves from the tiny shards of glass was enough to convince me that one good jar is enough for now; after all, there will ALWAYS be more tomorrow....

One thing I noticed that concerned me were several bottles of salad dressing, oils, packages of deli foods and other items had obviously been opened and poured out, a practice that my stores don't typically employ.. I'm not sure if the manager that night was just being extra thorough in policy practice, if they are starting a new policy of opening packages before throwing out (like many corporate stores do) or if an employee was just screwing around on the clock... I definitely hope that they are not enforcing this practice because not only does it ruin that particular item, it spills out all over everything and ruins whatever else may be salvageable, resulting in a nasty, mucky mess that even I am reluctant to dig through.

The notion of dumpster diving immediately turns off most people because it conjures images of landfills and domestic household waste when the truth is that most of the time, food is put in boxes and bags separate from other waste before making it to the dumpster. All I(you) have to do is open it up and take it.
As told by Michael at 12:28 PM No comments: