I noticed the counter reached over 6,000 page views since I added it last February and shows visitors from 53 countries. I feel like I have accomplished something by sharing my unique perspective with the world, though whatever it is I  may have accomplished is unclear.
Why do you read this?
Has reading this changed anything for you?
Have you changed anything because of what you have read here?
Do you read this to learn about freeganism of dumpster diving?
I would like for readers to leave comments about where they are, why they read and what effect reading this has had, if any. Share your unique perspective with me.
As told by Michael at 11:18 PM 7 comments:

This is an old draft I never got around to finishing, but thought Id go ahead and post.

7/14/09
Its been nearly two months since I posted anything, so Ive been feeling a bit negligent. I guess I haven't been going to the dumps much lately, but I have not returned to the consumer lifestyle... Summer is generally unfavorable for dumpster diving with the random thunderstorms and sweltering heat during the day, but it also brings the option of growing your own food. I was thinking about it as I picked blackbrries from a patch next to a stream across the street from my house. I can't always count on going to the dumpster and finding fresh potatoes or cheese, but I can walk out to the garden and pick fresh squash and peppers or go across the street for peaches and blackberries. Growing food seems to be the other half of this freegan lifestyle that, so far, I have failed to acknowledge.
This will be my second summer since starting the Grand Experiment. I guess that my focus last summer was less on the growing food, but the transition of the plentiful winter and spring to the sparse summer.
As told by Michael at 12:05 AM 12 comments:

I have been going to the dumps lately and have been pretty successful in finding good things. Most of the good stuff is at the grocery store. I like it here because they separate the compostable produce form the rest of the garbage for farmers to pick up. This means not having to dig through the yucky to get good veggies. Since we are heading in to the rainy season all winter, it rains pretty much every night. These less favorable conditions don't always last the whole evening, but I've grown accustomed to getting caught in the rain.
Here is what we found some time last week. There was lots to share with friends and everyone else who has been helping me out since I got here. 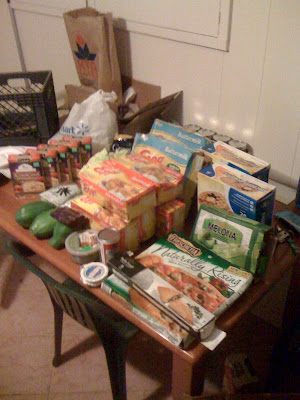 We found tons of waffles, couscous, phyllo dough, pizza, olives, raw acai cacao bars, melona bars and lots of sprouts. We also stopped and picked a few papayas on the way home to make green papaya salad.. mmmmm....
As told by Michael at 12:03 AM 2 comments:

What a long, strange trip it's been

Wow. So much has happened since March I don't know where to begin. So ill start with the last thing I remember: getting ready to move to Hawai'i. Leading up to the move I was in super saver mode. From January to August, I was able to save more money than I have ever had before; all because my cost of living was close to nothing.
In May and June I went to Missouri for a family reunion, which was sort of cool. It was good to see everyone again since it will be a while before it happens again. I also saved enough money to afford plane tickets for my sister and myself to go to Albuquerque, New Mexico to visit my aunt before my move. That was an amazing, magical week! I was a little unsure about it, thinking it might put a dent in my moving funds and get me off track for getting moved, but I immediately found that it is exactly what I was supposed to be doing. Life has a funny way of working out just how it ought to. This was my first experience with the desert and I hope to go back again soon, but thats another story. I hoped to do some dumpster diving in Albuquerque, but never really got a good opportunity to do it.. Next time.
So, after returning home to North Carolina from Albuquerque, I had two weeks to wrap up my life on the east coast and gather what I needed to start a new life in the Pacific. Those were two very fast paced weeks. Every day I worked towards tying up loose ends with friends, finishing up work, closing accounts, packing and getting rid of everything I wasn't taking with me, which was everything that didn't fit in my suitcase. I had a yard sale in the last week, which turned out to be a give away. I invited everyone from my dumpster diving group and potluck club on Meetup.com to come take what they wanted and a few lucky people came and cleaned me out.  One woman had several children from her two marriages and had more than thirty grandchildren! She loaded up her pickup truck with everything I had left when she arrived. It felt really good to be free of everything and even better to know that it all went to people who needed it.
So now I live in Hawai'i. I have been staying with a friend but am looking for other options, since I have overstayed my welcome. There are lots of places to camp, so I spent nights at a park and on the beach. Im looking for a work trade situation, but it is proving to be a little more difficult than I imagined.. In the mean time, I have done the most amazing things I never imagined I'd do: climbed a lychee tree to harvest the biggest most delicious lychee Ive ever had, hiked out to watch new earth being birthed from a volcano, swam with sea turtles, jumped from waterfalls in to crystal pools and reached new pinnacles of culinary achievement with foods I have never seen or heard of. Every day is the best day of my life. I love the path that I have chosen, and none of these things would have been possible for me if I did not live out of dumpsters for the last two years.
As told by Michael at 4:54 PM 1 comment: