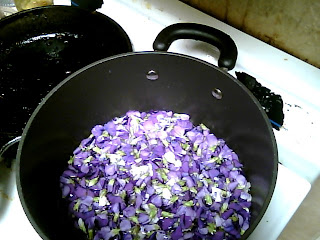 I think this sort of fits the definition of a cordial.. With dandelion season coming in to full swing, I have been toying with some recipes to make flavored syrups using spring flowers. The last batch of dandelion syrup turned out excellent, so I decided to try a batch using violets this time.

I went to the park today and picked about 4 cups of violets and brought them back home. I tried to get ones that had just sprouted up and had not fully opened, because they have not been visited by any bugs yet and have lots of nectar. I boiled the flower heads in 4 cups of water and let them steep for a few minutes. After a while the petals became transparent and the water became a teal greenish blue. I strained the liquid with a sieve and a linen cloth to get all the particulates out. Once i had the strained liquid back on the stove I added about 2 cups of sugar and the strained juice of 2 limes. Once I added this and brought it to a boil, the solution changed to a bright purple, like beet juice. I let it simmer away for about two hours on low-med. heat while I sterilized a jar to put it in. Once it was ready and had a syrupy consistency, I poured it in the jar and covered it, replacing it in the hot water bath to cool.

Once it has sealed itself, I can put it in the fridge and try some out. If you stir about a teaspoon of syrup in to a glass of water, it makes a sweet refreshing tea.

Update: The syrup is really tasty. I could have let get a bit thicker, but the flavor was good, very subtle. It kept its excellent clarity and color and makes a big statement spread on a piece of toast. Im looking forward to experimenting with and perfecting a recipe! :)
As told by Michael at 2:58 PM

Email ThisBlogThis!Share to TwitterShare to FacebookShare to Pinterest
Labels: Recipes